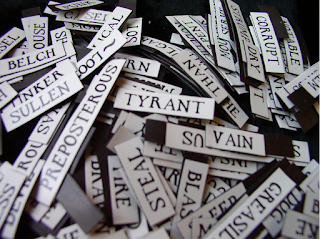 My last post was about Using Symbols in Branding. Symbols are triggers to emotions associated with hopes, fears and self-image reinforcement. Words and phrases can also be powerful. They can evoke strong emotions - both positive and negative.

When I was a new business strategist at Hallmark, I knew how to increase the score of a new business concept (in concept testing) by using the right words that I knew would evoke positive imagery and emotions. I didn't however because I did not want to inflate the results. I used neutral language to describe the concept so that its score would be more predictive of its market potential in our volumetric forecasting.

What are some of the words and phrases that can help a brand? Here are some:

Now think of some words and phrases and other labels that have been used to turn people off. Politicians and political parties use these to create negative emotional associations for their enemies. Here are some more recent ones:

Or, consider modifying or replacement words to make people feel better about something (often resulting in oxymorons). Here are some examples of that:

My point in all of this is that words can evoke strong associations and emotions. Words can also mollify situations and people. And they can change the meaning of things and make them more acceptable and even compelling. As marketers, we need to be masters of words and phrases.

Posted by Brad VanAuken at 3:40 PM