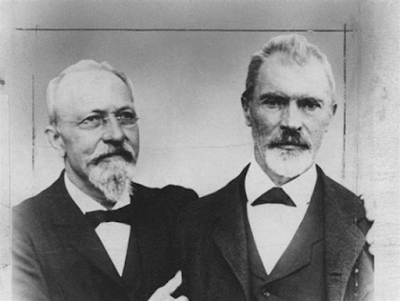 
I recently purchased The Branding of America book by Robert Hambleton at an art gallery used book sale. One of the things that I immediately found fascinating (though not surprising in retrospect) is that most of the earlier brands in America were named after the people who founded the brands versus using coined or associative descriptive names, which is a much more common approach in contemporary branding.

Here are some examples:

As an outlier, George Eastman named his company Eastman Kodak Company in 1892. The word Kodak was registered as a trademark in 1888. George Eastman said, "I devised the name myself. The letter 'K' had been a favorite with me - it seems a strong, incisive sort of letter. It became a question of trying out a great number of combinations of letters that made words starting and ending with a 'K.' The word "Kodak" is the result." The coined name 'Kodak' became the brand.

Compare all of these brands with some of today's entrepreneurs and their brand's names:

It is interesting how entrepreneurs have largely moved away from naming brands after themselves to creating coined, associative descriptive or fanciful names. This is an example of how branding has evolved over time.
PS - One modern outlier is Donald Trump, who brands all of his businesses with his last name.
Posted by Brad VanAuken at 6:19 AM